Business optimism amongst Irish SMEs fell in the first quarter of the year as war in the Ukraine and surging inflation left companies more wary about current business conditions and their future prospects. The latest quarterly Linked Finance SME Confidence Index, based on research conducted by Behaviours & Attitudes, came in at 61.1 in Q1 2022, down from 67.9 in the prior quarter, and 65.1 a year ago. It’s the lowest index level since Q4 2020, in the middle of the Covid-19 pandemic.

The positive impact of the Government’s ending of pandemic restrictions on 21st January appears to have been outweighed by the feared slowdown in the economy caused by the war in Ukraine and wider increase in input costs along with cost-of-living factors. Only 35% of respondents said business activity in Q1 was better than the previous quarter (down from a high of 51% in Q3 2021) and future optimism also fell, with 38% of companies saying they expect future activity to improve (down from 48% in Q4 2021).

With inflation hitting 7.4% in April according to the CSO1, SMEs in Ireland are looking to recover their higher input costs by increasing prices. 39% of respondents said they increased prices in the quarter, up from 31% in Q4 2021 which was already at the highest level in ten years.

But higher prices don’t appear to be delivering stronger profitability for SMEs, suggesting margins are being squeezed by an increase in input costs in areas like energy, rent, and food. 29% of respondents said operational profits were higher this quarter, well below the number that increased     prices, and lower than the 31% with improving profit performance in Q4 2021.

The weakening economic sentiment shown in the Index is consistent with other recent economic reports. In March the ESRI revised downwards its growth forecast2, and in April the Central Bank of Ireland (CBI) followed suit3. It’s not that the economy is being tipped into recession, but the pace of the recovery out of Covid looks like it will be slower than anticipated and hampered by consumer price inflation.

The CBI also recently said access to credit for the SME sector was resilient, but that some sectors like accommodation and food face a longer road to recovery. In its April note4 the CBI said that future challenges may emerge for SMEs due to inflationary pressures and the tapering of the Government’s Covid support programme.

The previous trend in the Index of smaller SMEs struggling more has continued in this quarter. Just 33% of micro-SMEs (those with 1-3 employees) are more optimistic about their future prospects compared to 68% of mid/large SMEs (with 10+ employees). This trend is also reflected in employment, with only 4% of micro-SMEs increasing headcount in the quarter, compared to 34% of mid/large SMEs. Overall sentiment on hiring has fallen slightly this quarter with 10% of companies increasing headcount, compared to 15% in Q4 2021

“Hopefully this is a short-term stalling of the recovery trends we have been seeing recently from the Index, but clearly a lot has changed in recent months that makes the business environment more challenging. The war in Ukraine is first and foremost a humanitarian tragedy, but it is also having a broader impact on the global economy particularly through the inflationary pressures of higher energy and input costs.

Irish SMEs have been looking to recover pricing power and improve profitability, but with their own input costs also rising, margins are still being squeezed even where customers are facing higher prices. We should not be overly gloomy though, as the Index is still much higher than the levels it fell to during the pandemic, and whilst we’ve seen a pull back this quarter on most metrics it may only be temporary.”

Last year Linked Finance issued loans worth over €36m, an increase of 80% on the prior year, with strongly performing sectors including construction (+87% on 2020), professional services (+65%) and retail (+15%).

Since its establishment in 2013 Linked Finance has grown rapidly to deliver over €189m      to over 3,151 ambitious local businesses in every county in the country. Companies that have availed of lending through Linked Finance include Skingredients, Tara Slevin, The Agile Executive, and Schoolbooks.ie. 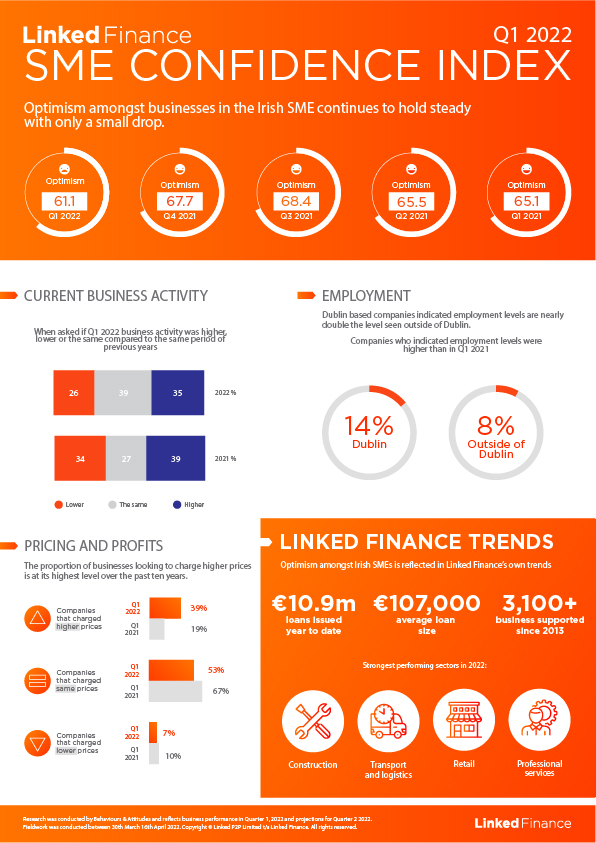